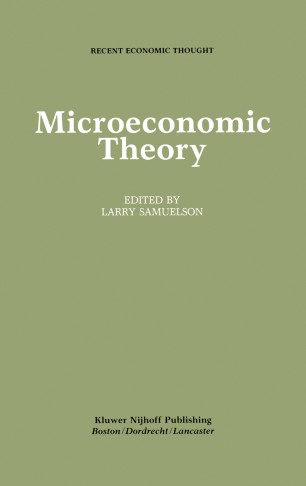 It is often said that everyone understands precisely what is meant by the notion of probability-except those who have spent their lives studying the matter. Upon close scrutiny, the intuitively obvious idea of probability becomes quite elusive. Is it a subjective or objective concept? Are random variables simply improperly measured deterministic variables, or inherently random? What is meant by the phrase "other things held constant" that often appears in descriptions of probability? These questions involve fundamental philosophical and scientific issues, and promise to elude definitive answers for some time. The same type of difficulty arises when attempting to produce a volume on microeconomic theory. The obvious first question-what is microeconomic theory?--