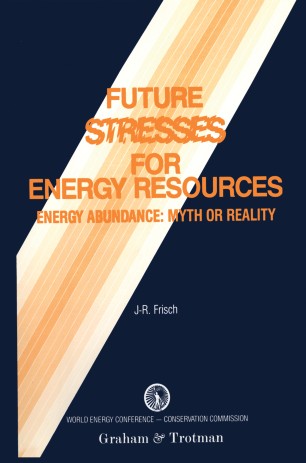 From its very beginnings, the Conservation Commission has devoted a large part of its research to long-term energy analyses. Following the first oil shock, it undertook its earliest work on the world demand-supply equilib­ rium for the period 2000-2020, the results of which were presented to the 10th Congress of the Conference at Istanbul in 1977. Since then, its analyses have become ever deeper, ever more various. In 1980, the stress was on the future for the Third World, while in 1983, its forecasts set out a new panorama for the world and for the main regions in the period 2000-2020. Therefore, what was more natural than that the Conservation Commission should bring its interest to bear on one of the major aspects of energy strategy: the comparison of future needs not merely with the fluctuations of supply but also with stocks of reserves. The problem, of course, had not been entirely ignored, but the field tended to be one in which intuitions and sketchy proofs were more readily available than systematic and comprehen­ sive analysis.