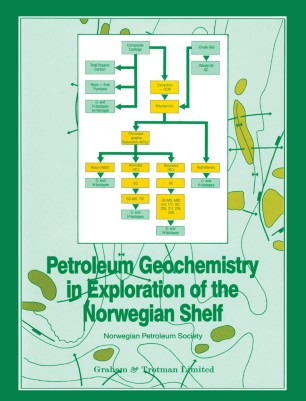 Petroleum Geochemistry in Exploration of the Norwegian Shelf

Proceedings of a Norwegian Petroleum Society (NPF) conference Organic Geochemistry in Exploration of the Norwegian Shelf held in Stavanger, 22–24 October 1984

This volume is the record of a three day symposium entitled "Organic Geochemistry in Exploration of the Norwegian Shelf", which was sponsored by the Norwegian Petroleum Society (Norsk Petroleumsforening) and held at the Rogalands Regional College, Stavanger on 22-24 October 1984. Twenty-nine papers were presented, and all but one are published in full herein. The aim of the conference was to focus on the application of geochemical methods to the current and highly active exploration of the Norwegian offshore. Emphasis was on practical interpretation and case histories rather than laboratory methods and techniques, and a strong attendance was sought among geologists and seismic interpreters active in exploration in Norway and Northwest Europe generally. On all counts the symposium was a great success with a total of 213 participants registered. In his opening address Mr Egil Bergsager, director of the Norwegian Petroleum Directorate, observed that during the 1970s petroleum geochemistry emerged from being a somewhat academic pursuit into a practical aid in exploration for hydrocarbons. This first stage, when many of the basic methods were developed, has now led in the 1980s to an expansion into applications in regional geological studies, including mathematical modelling of thermal history, hydrocarbon migration and basin development.