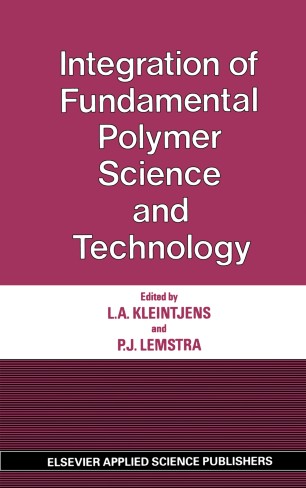 'Integration of Fundamental Polymer Science and Technology' is a theme that admits of countless variations. It is admirably exemplified by the scientific work of R. Koningsveld and C. G. Vonk, in whose honour this meeting was organized. The interplay between 'pure' and 'applied' is of course not confined to any particular subdiscipline of chemistry or physics (witness the name IUPAC and IUPAP) but is perhaps rarely so intimate and inevitable as in the macromolecular area. The historical sequence may vary: when the first synthetic dye was prepared by Perkin, considerable knowledge of the molecular structure was also at hand; but polymeric materials, both natural and synthetic, had achieved a fair practical technology long before their macromolecular character was appreciated or established. Such historical records have sometimes led to differences of opinion as to whether the pure or the applied arm should deserve the first place of honour. The Harvard physiologist Henderson, as quoted in Walter Moore's Physical Chemistry, averred that 'Science owes more to the steam engine than the steam engine owes to Science'. On the other hand, few would dispute the proposition that nuclear power production could scarcely have preceded the laboratory observations of Hahn and Strassmann on uranium fission. Whatever history may suggest, an effective and continuous working relationship must recognize the essential contributions, if not always the completely smooth meshing, of both extremes.