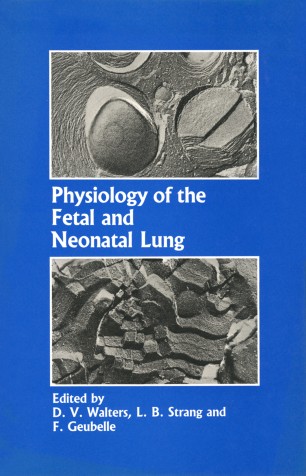 Physiology of the Fetal and Neonatal Lung

Proceedings of the International Symposium on Physiology and Pathophysiology of the Fetal and Neonatal Lung, held in Brussels, June 6–8, 1985

L. B. STRANG The past 25 years have seen a remarkable growth in our knowledge of lung development in its structural, physiological and biochemical dimensions. Much of the impetus for research leading to new knowledge has derived from the perception that many respiratory disorders in the newborn infant are due to defective development or maladaption of some component or components of the respiratory system. Thus, to cite one example, surfac­ tant deficiency is clearly seen to be the cause of atelectasis in hyaline mem­ brane disease; and to cite another, it is widely accepted that the mechanisms controlling patency of the ductus arteriosus and pulmonary vascular resistance also determine the right-to-Ieft or left-to-right shunting frequently observed in the course of neonatal respiratory disorders. There are, however, areas of physiological knowledge - such as those relating to respiratory control and to liquid formation and absorption - which are clearly of great relevance to lung adaptation at birth but where it has not yet proved possible to link a specific clinical state to the malfunction of a particular mechanism. In planning this symposium an attempt was made to organize the material in an orderly manner, starting with the embryonic and fetal stages of growth and development, continuing with respiratory control and the role of surfactant in lung aeration at birth, and ending with the treatment of neonatal respiratory disorders.