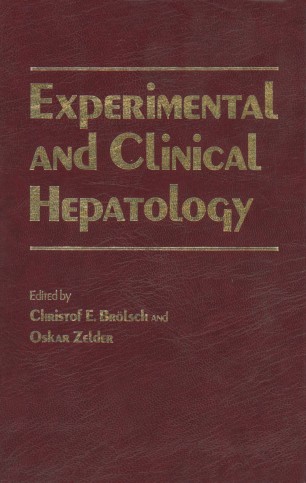 Proceedings of the 5th Workshop on Experimental and Clinical Hepatology held at Hannover, 23–24 November 1984

This is the fifth symposium on Experimental and Clinical Hepatology to be convened by the organisers, and, in common with the previous four, reflects the importance placed upon continuing discussion by clinical investigators as well as basic physiological and pharmacological researchers. Previous meetings which were held at the Surgical Department of the Philipps University in Marburg were dedicated to problems of direct clinical application, such as haemodynamics of portal hypertension, surgical approach to hepatic tumours, liver regeneration and temporary hepatic support. Clinical investigation was a subject which frequently came under discussion and some of these investigations have since lead to direct improvements in clinical therapy and many patients have benefited as a result. This time, the convocation was called to the Medizinische Hochschule Hannover where remarkable advances in clinical liver trans­ plantation have been the most striking event in clinical hepatology. The concensus of the meeting was that while significant clinical progress has been made, a variety of basic problems remained unsolved which will require further investigation. Special attention has, therefore, been given to topics such as acute liver damage, particu­ larly within the transplanted liver, to chronic active hepatitis and its spontaneous prognosis, to isolated hepatocytes and their effect on functional support of the liver, to mechanisms of liver circulation which may be altered completely within the transplant and to liver perfusion which is still considered unsatisfactory for subsequent transplantation.