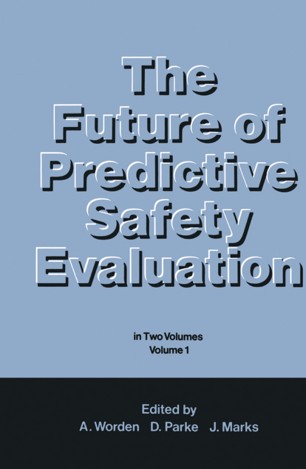 The Future of Predictive Safety Evaluation

A. N. WORDEN, D. V. PARKE AND J. MARKS THE BACKGROUND There is nothing new about the fact that chemical substances derived either from natural products or by synthetic means .. can give rise to toxicity in animals and human beings, and that they must be subjected to controls. The earliest writings speak of such toxicity and, from the times of ancient Egypt and in the Old Tes­ tament, controls have existed[l]. In the Middle Ages Paracelsus (1493-1541) noted that "All things are poisons, for there is nothing without poisonous qualities. It is only the dose which makes a thing a poison", and hence he stressed the importance of dose relative to toxic reactions [ 2] . Most of the early controls concentrated on substances that were to be deliberately administered to the human subject in the form of medicines. Legislation for many centuries was mainly con­ cerned with regulating the activities of apothecaries and physicians. The Royal College of Physicians, for example, was originally established to control the activities of physicians within London. Among the controls which it exerted was that over the use of medicinal substances. Such controls were, however, poor, based as they were on hearsay evidence of toxicity. For many centuries no means existed for the accurate determination of toxicity.