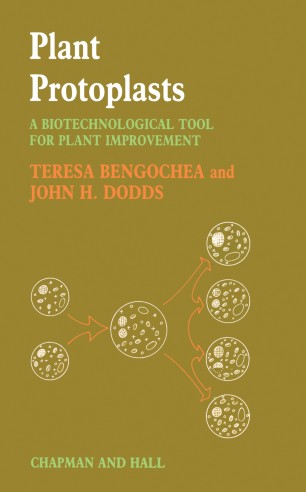 A Biotechnological Tool for Plant Improvement

Isolated plant protoplasts are 'naked' cells that have had their cell wall removed either by mechanical action or by enzymic digestion. As a result of wall removal the only barrier that exists between the cell protoplasm and the external environment is the plasma membrane. The removal of the cell wall has drastic osmotic consequences for the isolated cell. Rather like animal cells, the isolated protoplasts must be maintained in an osmotically balanced (isotonic) nutrient medium or they will burst. As will be seen later, the isolation of plant protoplasts is not a particularly new event; as early as the 1890s scientists were isolating protoplasts mechanically and studying effects such as protoplast streaming. What has brought protoplast technology to the forefront of plant biology is the potential application of these structures in non-traditional plant improvement methods. Extreme care must be exercised by the reader, however, in be­ lieving some of the claims that have been put forward for the use of protoplasts in improvement programmes. In the 20 years since the first experiments in routine enzyme isolation of large numbers of protoplasts no real improvement has been obtained in a commercial crop plant. This does not mean that improvement is impossible; it simply indicates that it may be a longer term objective than some people would like to admit.