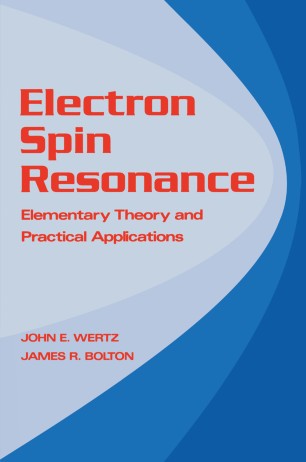 In the twenty-five years since its discovery by Zavoiskii, the technique of electron spin resonance (ESR) spectroscopy has provided detailed struc­ tural information on a variety of paramagnetic organic and inorganic sys­ tems. It is doubtful that even much later than 1945 any chemist would have been so bold as to predict the great diversity of systems which have proved amenable to study by ESR spectroscopy. In this book we have attempted to provide numerous examples of actual ESR spectra to illus­ trate the wide scope of application. No attempt has been made to present a comprehensive coverage of the literature in any field, but references to reviews and key articles are given throughout the book. This introductory textbook had its origin in lecture notes prepared for an American Chemical Society short course on electron spin resonance. The present version is the result of extensive revision and expansion of the original notes. Experience with such courses has convinced us that there are large numbers of chemists, physicists, and biologists who have a strong interest in electron spin resonance. The mathematical training of most of the short-course students is limited to calculus. Their contact with theories of molecular structure is largely limited to that obtained in an elementary physical chemistry course. It is to an audience of such background that this book is directed.