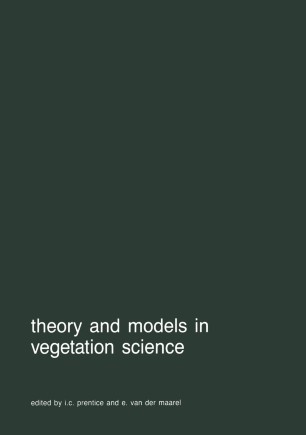 Theory and models in vegetation science

July 8 -13, 1985, an international group of scientists met in Uppsala for a symposium on the subject 'Theory and models in Vegetation science' . A volume of over 70 extended abstracts had already been published in time for the symposium (Leemans et at., 1985). That volume included contributions from nearly all of those who gave talks or presented posters at the symposium. The present volume represents the fully-refereed proceedings of the symposium and features articles by a majority of speakers, plus a handful by poster authors, and two that were sent independently to Vegetatio and seemed timely and relevant to the symposi­ um's theme. As organizers, we tried to bring together for the symposium people whose interests covered several key aspects of modern vegetation science: vegetation dynamics, on shorter or longer time scales; the analysis of community data, and of vegetation-environment relationships in both time and space; and the functional basis of vegetation in terms of the individual plants and plant populations that it comprises. We encouraged contributors to focus on theory and models - not necessarily mathematical models, but also conceptual models that might contribute to the development of theory and mathematical models.