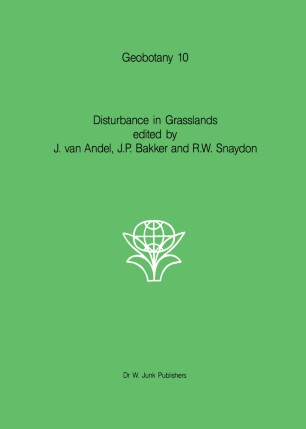 This volume is the result of a Symposium, held in October, 1985, to celebrate the Silver Jubilee of the De­ partment of Plant Ecology of the University of Groningen. The Department of Plant Ecology was founded by Professor Dingeman Bakker and has, since its incep­ tion, been involved with studies of grasslands, and especially with the effects of human interference on grassland communities. It has been especially involved in an almost unique enterprise to convert areas of grassland from intensive agricultural production to nature reserves. With over-production of most food commodities in the EEC, and increasing interest in various types of 'set aside' schemes, this initiative now seems to be remarkably prescient. The Netherlands have a long history of human manipulation of the environment. Indeed, the Dutch en­ vironment is probably more man-made than that of any other country. In view of this, and the Laborato­ ry's interest in managed grasslands, it is not surprising that 'Disturbance in Grasslands' was selected as the topic for the Laboratory's Jubilee Symposium. Although both the Symposium and the resulting vo­ lume, have a strong Dutch component, the organisers invited a number of contributors from Europe and elsewhere to provide key chapters. The result is a volume which covers many aspects of disturbance in a variety of grasslands. Disturbance is considered at both the community and the population level, and the principles and processes underlying those responses are explored.