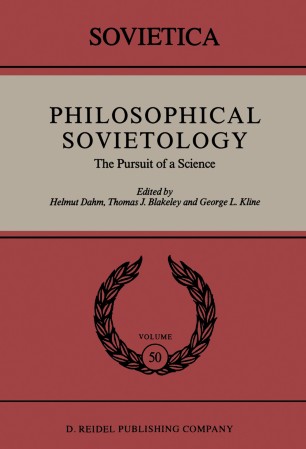 The Pursuit of a Science

On February 24-25, 1956, in a closed session of the 20th Congress of the Communist Party of the Soviet Union, Nikita S. Khrushchev made his now famous speech on the crimes of the Stalin era. That speech marked a break with the past and it marked the end of what J.M. Bochenski dubbed the "dead period" of Soviet philosophy. Soviet philosophy changed abruptly after 1956, especially in the area of dialectical materialism. Yet most philosophers in the West neither noticed nor cared. For them, the resurrection of Soviet philosophy, even if believable, was of little interest. The reasons for the lack of belief and interest were multiple. Soviet philosophy had been dull for so long that subtle differences made little difference. The Cold War was in a frigid period and reinforced the attitude of avoiding anything Soviet. Phenomenology and exis­ tentialism were booming in Europe and analytic philosophy was king on the Anglo-American philosophical scene. Moreover, not many philosophers in the West knew or could read Russian or were motivated to learn it to be able to read Soviet philosophical works. The launching of Sputnik awakened the West from its self­ complacent slumbers. Academic interest in the Soviet Union grew.