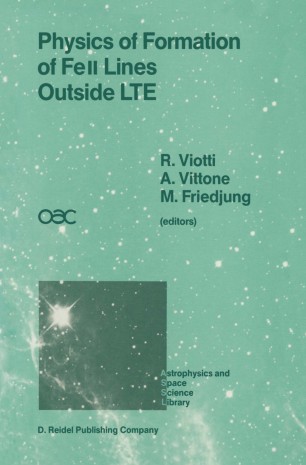 Physics of Formation of FeII Lines Outside LTE

The same kind of physics is frequently common to very different fields of Astrophysics, so experts in each of these fields have often much to learn from each others. It was therefore logical that the International Astronomical Union should sponsor a colloquium about an ion which pro­ duces many spectral lines that can be used as a diagnostic for many sorts of objects, and which may sometimes have a major influence on physical processes occurring in astro­ physical sources. The lines of singly ionized iron (FeII) are present in absorption and emission in the spectra of objects such as the Sun, cool stars, circumstellar envelopes of hot stars, novae, diffuse nebulae including the supernova remnants, and active galactic nuclei. These lines are very often formed far from LTE, and their interpretation is not easy in view of the complex Grotrian diagram for FeII, and the gaps in the knowledge of various physical parameters. In addition, the density of very strong FeII lines becomes very large in the ultraviolet, and the lines can play a major role in the line blanketing. They need therefore to be taken into account in any energy balance argument.