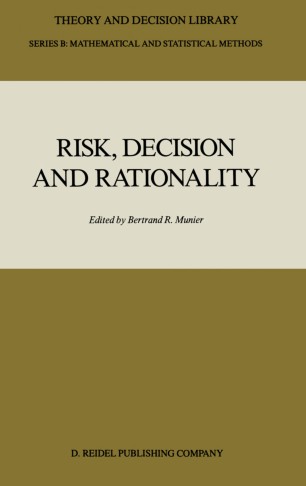 Decision Theory has considerably developed in the late 1970's and the 1980's. The evolution has been so fast and far-r2aching that it has become increasingly difficult to keep track of the new state of the art. After a decade of new contributions, there was a need for an overview' of the field. This book is intended to fill the gap. The reader will find here thirty~nine selected papers which were given at FUR-III, the third international confe­ rence on the Foundations and applications of Utility, Risk and decision theories, held in Aix-en-Provence in June 1986. An introductory chapter will provide an overview of the main questions raised on the subject since the 17th Century and more particularly so in the last thirty years, as well as some elementary information on the experimental and theoretical results obtained. It is thus hoped that any reader with some basic background in either Economics, Hanagement or Operations Research will be able to read profitably the thirty-nine other chapters. Psychologists, Sociologists, Social Philosophers and other specialists of the social sciences will also read this book with interest, as will high-level practitioners of decision~making and advanced students in one of the abovementioned fields. An expository survey of this volume will be found at the end of the introductory chapter, so that any of the seven parts of the book can be put by the reader in due perspective.