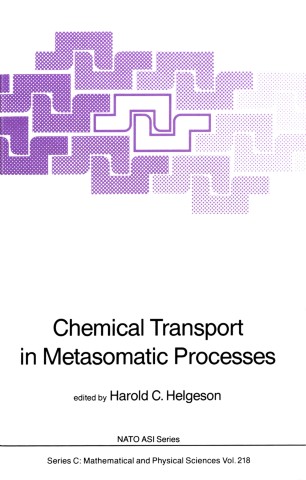 As indicated on the title page, this book is an outgrowth of the NATO Advanced Study Institute (ASI) on Chemical Transport in Metasomatic Processes, which was held in Greece, June 3-16, 1985. The ASI consisted of five days of invited lectures, poster sessions, and discussion at the Club Poseidon near Loutraki, Corinthia, followed by a two-day field trip in Corinthia and Attica. The second week of the ASI consisted of an excursion aboard M/S Zeus, M/Y Dimitrios II, and the M/S Irini to four of the Cycladic Islands to visit, study, and sample outstanding exposures of metasomatic activity on Syros, Siphnos, Seriphos, and Naxos. Nine­ teen invited lectures and 10 session chairmen/discussion leaders participated in the ASI, which was attended by a total of 92 professional scientists and graduate stu­ dents from 15 countries. Seventeen of the invited lectures and the Field Excursion Guide are included in this volume, together with 10 papers and six abstracts representing contributed poster sessions. Although more than two years has elapsed since the ASI, all of the papers in this volume are up to date, and each has benefited from stimulating discussion, critical comment, and scientific interaction, both at the ASI and in the subsequent peer review process. The scientific emphasis of the ASI focused initially on upper mantle metasoma­ tism and crust/mantle interaction. Isotopic evidence was presented indicating that upper mantle peridotites have undergone nonequilibrium metasomatic exchange with an external oxygen-bearing fluid.