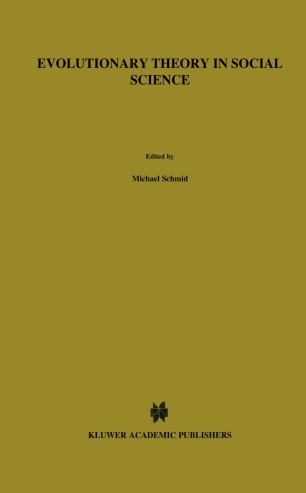 In retrospect the 19th century tmdoubtedly seems to be the century of evolutionism. The 'discovery of time' and therewith the experience of variability was made by many sciences: not only historians worked on the elaboration and interpretation of this discovery, but also physicists, geographers, biologists and economists, demographers, archaelogists, and even philosophers. The successful empirical fotmdation of evolutive processes by Darwin and his disciples suggested Herbert Spencer's vigorously pursued efforts in searching for an extensive' catalogue of prime and deduced evolutionary principles that would allow to integrate the most different disciplines of natural and social sciences as well as the efforts of philosophers of ethics and epistemologists. Soon it became evident, however, that the claim for integration anticipated by far the actual results of these different disciplines. Darwin I s theory suffered from the fact that in the beginning a hereditary factor which could have his theory could not be detected, while the gainings of grotmd supported in the social sciences got lost in consequence of the completely ahistorical or biologistic speculations of some representatives of the evolutionary research programm and common socialdarwinistic misinterpretations.