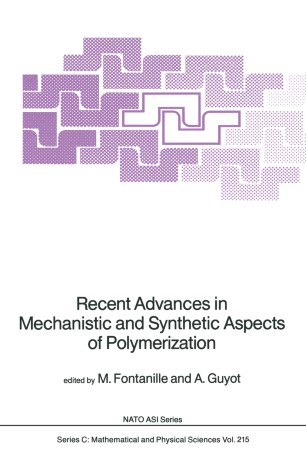 Recent Advances in Mechanistic and Synthetic Aspects of Polymerization

Due to their specific properties, polymers with well-defined structures have been receiving increasing attention over the last several years. Owing to the wide variability of their properties, these specialty polymers have been used in various areas from biomedical engineering to electronics or energy applications. The synthesis of such polymers necessi­ tates the use of new methods of polymerization which derived from an insight into the mechanism of polymerization reactions. A NATO Advanced Research Workshop on "Frontiers in Polymerization Catalysis and Polymer Synthesis" was held in BANDOl (FRANCE) in February 1987. Its aim was to assess the new polymerization methods, as well as the latest advances in the mechanisms of conventional polymerization reactions together with their applications to the synthesis of new macromolecular structures. The financial support from the NATO Scientific Affairs Division which covered the "lecturers' accomodation and travel expenses as well as the organization charges of this event gave it international scope. Several industrial companies participate at the meeting and contributed to it success. The organizors who are also editors of these proceedings, want to express their thanks to both NATO Scientific Affairs Division and the companies present at the meeting.