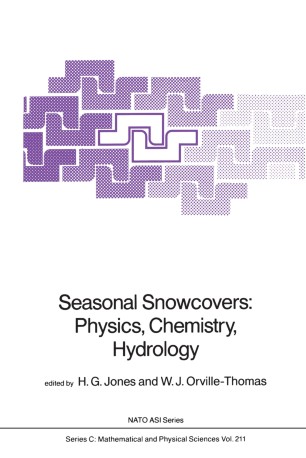 In recent years, much concern has been expressed on the deleterious effects that anthropogenic emissions of acidic pollutants have on ecosystems of both industrialized countries and remote areas of the world. In many of these regions, seasonal snowcover is a major factor in the transfer of atmospheric pollutants, either to terrestrial and aquatic ecosystems or to the more permanent reservoirs of glaciers and ice sheets. The recognition of the role that seasonal snowcovers can thus play in the chemical dynamics of whole ecosystems was recently echoed by the Committee on Glaciology of the National Research Council (National Academy of Sciences, National Academy of Engineering and the Institute of Medicine) which recommended that studies on "Impurities in the snowpack, their discharge into runoff, and management of the problem" be rated at the highest prority level (ref. a). It is in this context that the Advanced Research Institute (ASI) brought together scientists active in the fields of snow physics, snow chemistry and snow hydrology. The programme was structured so as to facilitate the exchange of information and ideas on the theories for the chemical evolution of seasonal snowcovers and snowmelt and on the impact of the chemical composition of the meltwaters on the different components of hydrological systems. As a consequence the ASI also attracted participants from potential users of the information that was disseminated; these were particularly concerned with the effects of snowmelt and snowcover on terrestrial biota and those of lakes and streams.