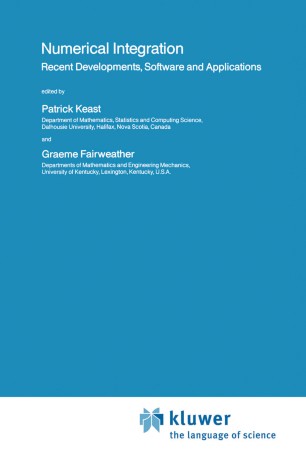 This volume contains refereed papers and extended abstracts of papers presented at the NATO Advanced Research Workshop entitled 'Numerical Integration: Recent Developments, Software and Applications', held at Dalhousie University, Halifax, Canada, August 11-15, 1986. The Workshop was attended by thirty-six scientists from eleven NATO countries. Thirteen invited lectures and twenty-two contributed lectures were presented, of which twenty-five appear in full in this volume, together with extended abstracts of the remaining ten. It is more than ten years since the last workshop of this nature was held, in Los Alamos in 1975. Many developments have occurred in quadrature in the intervening years, and it seemed an opportune time to bring together again researchers in this area. The development of QUADPACK by Piessens, de Doncker, Uberhuber and Kahaner has changed the focus of research in the area of one dimensional quadrature from the construction of new rules to an emphasis on reliable robust software. There has been a dramatic growth in interest in the testing and evaluation of software, stimulated by the work of Lyness and Kaganove, Einarsson, and Piessens. The earlier research of Patterson into Kronrod extensions of Gauss rules, followed by the work of Monegato, and Piessens and Branders, has greatly increased interest in Gauss-based formulas for one-dimensional integration.