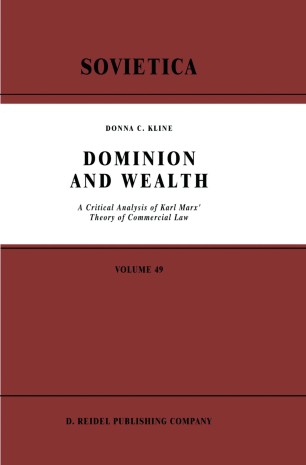 A Critical Analysis of Karl Marx’ Theory of Commercial Law

Donna Kline's contribution to the Sovietica series falls outside the strict confines of the study of Soviet Marxism-Leninism. It centers its attention on the seemingly minor question of Marx' knowledge of and attitude toward the legal theory and practice in vogue at the time he was writing studies that directly addressed issues of law and economics, and that indirectly helped to fashion the legal and economic behavior of Soviet-style regimes. That this question is not as minor or as irrelevant to Marxism-Leninism as it might seem at fIrst glance flows from Marx' obvious intent to do a thorough critique of all the vectors of 'bourgeois-capitalist' civilization and culture, clearly expressed in the many key texts, where 'legal relations' form at least part of the central focus. Marx' thought was forming when the 'bourgeois' law that had become self-conscious at the end of the 18th century was, following the French Revolution, trying to 'take possession' of the social-political consciousness of European-American culture, and fInding itself coming up against the 'vagaries' of economic quasi-anarchy. There is a sense in which the 'bourgeois-capitalist' efforts at developing a legal code for existing economic practice represent a sort of 'ideology in practice' to be applied to the same phenomena that Marx wanted to account for in his peculiarly Hegelian ideological critique.