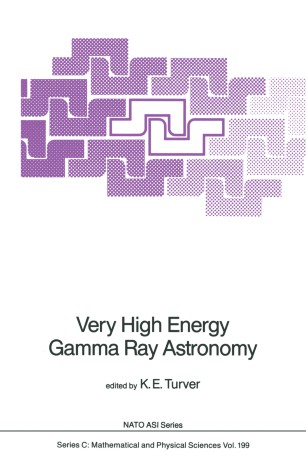 An Advanced Research Workshop on Very High Energy Gamma Ray Astronomy and Related Topics was held at Durham, England during August 11-15 1986. The meeting was sponsored by the Scientific Affairs Division of NATO and the University of Durham. It is four years since the first Workshop dedicated to High Energy Gamma Ray Astronomy was held at Ootacamund, India. At that meeting the developments in Very High Energy Gamma Ray Astronomy over a period of more than 20 years were reported and the methodology, limitations, improvements and prospects for further progess were discussed. The possible requirement for a follow-up meeting was clear if the optimistic future foreseen for the field at the Ooty meeting was correct. The Durham meeting was suggested to fill this role. Although the arrangements for the Durham meeting were discussed as long ago as 1983 with possible dates in 1984 or 1986, the eventual date in 1986 has proved admirable and has coincided with a time when further advances have been reported. An important feature of the proposal for the Durham meeting was the emphasis on a series of Workshop sessions, the conclusions of each to be summarized by a Rapporteur. The purpose of these sessions was to provide a consensus view of many of the important areas in the field at a time of increasing interest by the rest of the astrophysics community.