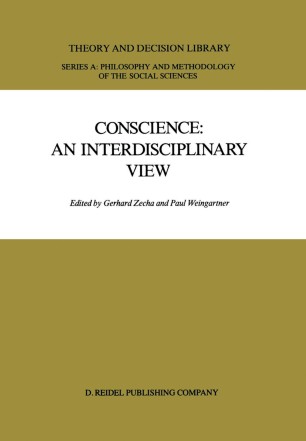 Salzburg Colloquium on Ethics in the Sciences and Humanities

Value change and uncertainty about the validity of traditional moral convictions are frequently observed when scientific re­ search confronts us with new moral problems or challenges the moral responsibility of the scientist. Which ethics is to be relied on? Which principles are the most reasonable, the most humane ones? For want of an appropriate answer, moral authorities of­ ten point to conscience, the individual conscience, which seems to be man's unique, directly accessible and final source of moral contention. But what is meant by 'conscience'? There is hardly a notion as widely used and at the same time as controversial as that of conscience. In the history of ethics we can distinguish several trends in the interpretation of the concept and function of conscience. The Greeks used the word O"uvEt81lm~ to denote a kind of 'accompa­ nying knowledge' that mostly referred to negatively experienced behavior. In Latin, the expression conscientia meant a knowing­ together pointing beyond the individual consciousness to the common knowledge of other people. In the Bible, especially in the New Testament, O"uvEt81l0"t~ is used for the guiding con­ sciousness of the morality of one's own action.