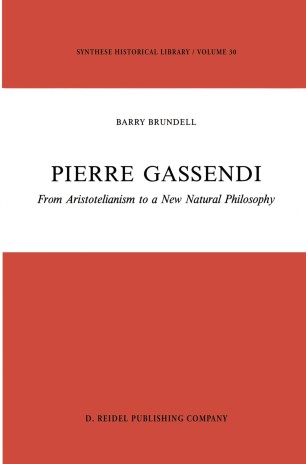 From Aristotelianism to a New Natural Philosophy

Pierre Gassendi (1592-1655) lived in three civilizations in the span of one life-time: medieval ecclesiastic, Renaissance humanist and modern and he never cut himself loose from any of them. It is probably scientific; because he managed to be at home in all three that history has allocated to him a position somewhere on the fringe of the inner circle of genius in the seventeenth-century scientific revolution. While he was not a front-runner, Gassendi was nevertheless a pioneer of modern corpuscularianism and his influence on the development of empirical science was truly international. It is precisely because Gassendi was a figure of the second rank - a significant but lesser luminary - that we need to examine his work closely, for the less famous contemporaries help us to explain what the great ones do. It might seem that Gassendi has received his share of attention from scholars, even though it is sometimes suggested otherwise. Several full­ length monographs have been published in the past three decades, and there have been a number of articles in scholarly journals. Yet, despite the indisputable worth of these studies, the picture of Gassendi that has emerged from them has been partial and at times wide of the mark, so that the true story remains to be told.