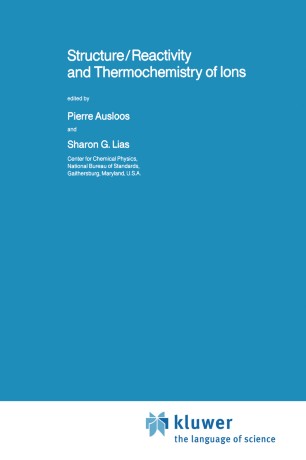 Structure/Reactivity and Thermochemistry of Ions

This volume presents the proceedings of a 1986 Advanced Study Institute entitled "Structure/Reactivity and Thermochemistry of Ions", held at Les Arcs, France, June 30 to July 11, 1986. The format of a NATO Institute is ideally suited to in-depth communications between scien­ tists of diverse backgrounds. Particularly in the field of ion physics and chemistry, where on-going research involves physicists, physical chemists, and organic chemists - who use a variety of experimental and theoretical techniques - it is found that in the relaxed but stimula­ ting atmosphere of a NATO ASI, each professional group provides unique insights, leading to a better definition and solution of problems relating to the properties of gas phase ions. This book presents chapters based on the lectures presented at the Les Arcs ASI. The participants took the initiative to organize a number of specialized workshops - informal discussion groups which considered questions or problem areas of particular interest. The accounts of these sessions, which are also included in this book, make stimulating reading, and include considerable useful information. This Advanced Study Institute is the fourth in a series of NATO-spon­ sored institutes devoted to the chemistry and physics of ions in the gas phase. The first, in 1974, in Biarritz, France, focussed on "Interactions between Ions and Molecules".