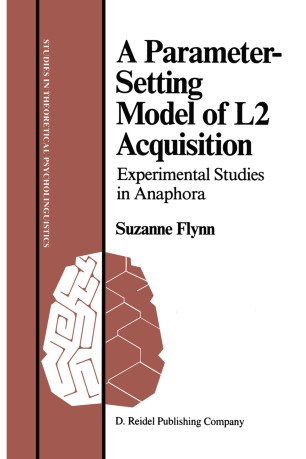 A Parameter-Setting Model of L2 Acquisition

Recent developments in linguistic theory have led to an important reorientation of research in related fields of linguistic inquiry as well as in linguistics itself. The developments I have in mind, viewed from the point of view of government-binding theory, have to do with the character­ ization of Universal Grammar (UG) as a set of subtheories, each with its set of central principles (perhaps just one principle central to each subtheory) and parameters (perhaps just one for each principle) according to which a principle can vary between an unmarked ('-') and a marked ('+') para­ metric value (Chomsky, 1985; 1986). For example, let us assume that there is an X-bar theory in explanation of those features of phrase structure irreducible to other subtheo­ ries of UG. Within X-bar theory variation among languages is then allowed only with respect to the position the head of a phrase occupies in rela t ion to its complemen ts such that the phrases of a language will be either right- or left-headed. Thus languages will vary between being right-headed in this respect (as in Japanese phrase structure) and being left-headed (as in English phrase structure). Everything else about the phrase structure of particular languages will be fixed within X-bar theory itself or else it will fallout from other subtheories of UG: Case theory; 0-theory, etc. (Chomsky, 1985:161-62; Chomsky, 1986:2-4; and references cited there). Hatters are the same in other modules of grammar.