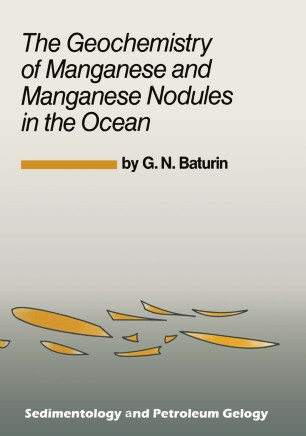 The Geochemistry of Manganese and Manganese Nodules in the Ocean

Manganese nodules were first discovered on the ocean floor 160 miles south-west of the Canary Islands on February 18, 1803, during the first complex oceano­ logical cruise of the Challenger. They surprised researchers by their unusual shape and also by their unusual chemical composition; nevertheless for many years after­ wards, they were considered merely as one of Nature's exotic marine tricks. After the Secpnd World War, a comprehensive investigation of the World Ocean started, and new data were obtained on a wide distribution of manganese nodules and their polymetallic composition, that made scientists consider nodules as one of the major characteristics of the deep oceanic zone. Recently, meaning since the 1960's, nodules have been recognized as a potential ore source, investigation of which is stimulated by the progressive depletion of land-based mineral resources. Several generations of scientists from various countries have contributed to the problem of exploration of manganese nodules on the ocean floor. Though the problem has been posed, it has not been solved yet because it required, in its turn, a scrutiny of some fundamental aspects such as composition, nature, accretion r'ate of nodules and retrieval of nodule fields. These problems have been discussed in thousands of papers and larger publications; see, in particulare, Mero, 1965; Horn, 1972; Morgenstein, 1973; Bezrukov, 1976; Glasby, 1977; Bischoff and Piper, 1979; Lalou, 1979; Manganese nodules, 1979; Varentsov, 1980; Cronan, 1980; Manganese nodules . . . , 1984, 1986.