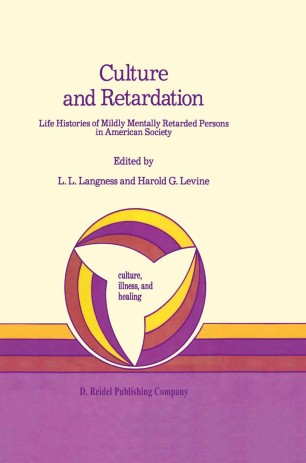 Mental retardation in the United States is currently defined as " ... signif­ icantly subaverage general intellectual functioning existing concurrently with deficits in adaptive behavior, and manifested during the development period" (Grossman, 1977). Of the estimated six million plus mentally retarded individuals in this country fully 75 to 85% are considered to be "func­ tionally" retarded (Edgerton, 1984). That is, they are mildly retarded persons with no evident organic etiology or demonstrable brain pathology. Despite the relatively recent addition of adaptive behavior as a factor in the definition of retardation, 1.0. still remains as the essential diagnostic criterion (Edgerton, 1984: 26). An 1.0. below 70 indicates subaverage functioning. However, even such an "objective" measure as 1.0. is prob­ lematic since a variety of data indicate quite clearly that cultural and social factors are at play in decisions about who is to be considered "retarded" (Edgerton, 1968; Kamin, 1974; Langness, 1982). Thus, it has been known for quite some time that there is a close relationship between socio-economic status and the prevalence of mild mental retardation: higher socio-economic groups have fewer mildly retarded persons than lower groups (Hurley, 1969). Similarly, it is clear that ethnic minorities in the United States - Blacks, Mexican-Americans, American Indians, Puerto Ricans, Hawaiians, and others - are disproportionately represented in the retarded population (Mercer, 1968; Ramey et ai., 1978).

`Anyone who appreciates a careful biography that chronicles the individual's transactions with the human environment, shaped by it but also shaping it, will love this book. It portrays eight closely observed persons, and provides two scholarly chapters of integration and interpretation, including the qualities of the no-numeric methodologies employed.'
Dr. C. Edward Meyers, Professor Emeritus of Psychology, University of Soutern California
`...this text is a must for all who are interested in mental retardation.'
Transcultural Psychiatric Research Review (1987)