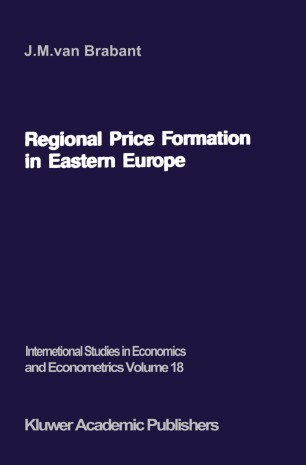 Theory and Practice of Trade Pricing

Part of the International Studies in Economics and Econometrics book series (ISEE, volume 18)

This monograph presents a detailed examination of a variety of issues pertain­ ing to pricing in the context of the Council for Mutual Economic Assistance (CMEA), a designation that I much prefer over Comecon. It situates itself within the contours of the pricing problematique that I have recently analyzed as one component of the broader aspects of monetary cooperation, essentially among the Eastern European countries (see Chapters 4 and 5 of Brabant, 1987). The suggestion that I elaborate in detail on the circumstances under which prices for regional trade within the framework of the CMEA are determined was 'strongly' urged by an anonymous referee of Brabant (1986b) and Josef Brada, the editor of Journal of Comparative Economics. Both evidently felt that the comparatively commodity-specific pricing issues that I have presented piecemeal in half a dozen articles or so since 1984 had remained too narrow, largely configured as they inevitably were by the empirical findings of exercises applied to a small number of commodities, as discussed here in Chapter 7. Under the circumstances, I saw little point in attempting to set forth these in­ tricate issues in a comprehensive framework. Perhaps the central motivation was that many of the regional pricing issues in the CMEA have, by and large, remained quite obscure and intractable. They might be crucial determinants in some isolated cases, as I was trying to verify.