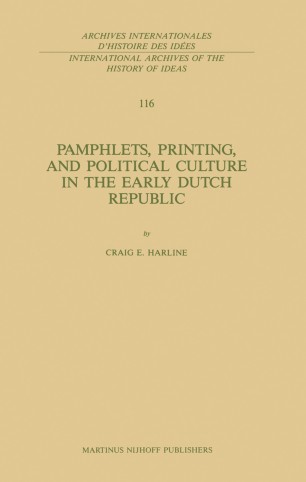 Pamphlets, Printing, and Political Culture in the Early Dutch Republic

Part of the International Archives of the History of Ideas book series (ARCH, volume 116)

This book resulted from a desire to understand the role of pamphlets in the political life of that most curious early modern state, the Dutch Republic. The virtues of abundance and occasional liveliness have made "little blue books," as they were called, a favorite historical source-that is why I came to study them in the first place. I But the more I dug into pamphlets for this fact or that, the more questions I had about their 2 contemporary purpose and role. Who wrote pamphlets and why? For whom were they intended? How and by whom were pamphlets brought to press and distributed, and what does this reveal? Why did their number increase so greatly? Who read them? How were pamphlets different from other media? In short, I began to view pamphlets not as repositories of historical facts but as a historical phenomenon in their own right. 3 I have looked for answers to these questions in governmental and church records, private letters, publishing records and related materials about printers, booksellers, and pamphleteers, and of course in pam­ phlets themselves. Like so many other students of the early press and its products, I discovered only scattered, incomplete images of actual con­ ditions, such as the readership or popularity of pamphlets. On the other hand, I found much material which reflected what people believed about "little books.