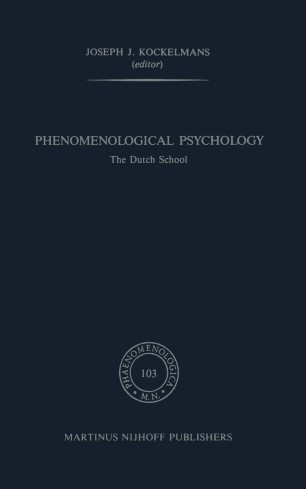 Over the past decades many books and essays have been written on phenomeno­ logical psychology. Some of these publications are historical in character and were designed to give the reader an idea of the origin, meaning, and function of phenom­ enological psychology and its most important trends. Others are theoretical in nature and were written to give the reader an insight into the ways in which various authors conceive of phenomenological psychology and how they attempt. to justify their views in light of the philosophical assumptions underlying their conceptions. Finally, there are a great number of publications in which the authors do not talk about phenomenological psychology, but rather try to do what was described as possible and necessary in the first two kinds of publications. Some of these at­ tempts to do the latter have been quite successful; in other cases the results have 1 been disappointing. This anthology contains a number of essays which I have brought together for the explicit purpose of introducing the reader to the Dutch school in phenomenological psychology. The Dutch school occupies an important place in the phenomenological move­ ment as a whole. Buytendijk was one of the first Dutch scholars to contribute to the field, and for several decades he remained the central figure of the school.