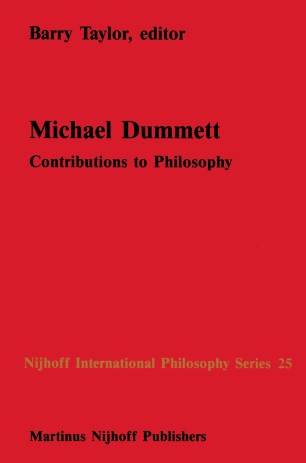 P. A. Schilpp's 'Library of Living Philosophers' is the series which introduced to the philosophical community the format of a volume of essays on the work of a distinguished philosopher, combined with replies to the essays by the philosopher targeted. The format proved attracti ve to a discipline which has always placed a high premium on debate. But the Schilpp series has shown itself unenterprising in its choice of subjects, concentrating on end-of-year reports on philosophers who are of undoubted distinction, but whose contribution to the subject can be regarded as rather definitely over. Which leaves a gap, which the present series is designed to fill, for volumes of a similar format aiming at assessment of philosophers who have distinguished themselves already by making a substan­ tial impact on their discipline, but whose further work too is awaited with eager anticipation. Michael Dummett is an ideal subject for a series with this goal of mid­ term assessment. His writings to date have permanently altered philosophy's conception of what is at issue between realism and idealism (and its paler cousin, anti-realism); and this has been achieved by way of a supplementary clarification of a host of issues in the philosophy of language and of mathematics, and of the Frege/Wittgenstein historical tradition from which such issues are typically approached in contemporary philosophy.