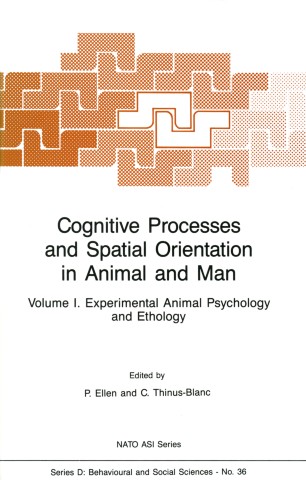 Cognitive Processes and Spatial Orientation in Animal and Man

These volumes represent the proceedings of NATO Advanced Study Institute on the topic of "Cognitive Processes and Spatial Orientation in Animal and Man" held at La-Baume-les-Aix, Aix-en-Provence, France, in June-July 1985. The motivation underlying this Institute stemmed from the recent advances and interest in the problems of spatial behavior. In Psychology, traditional S-R concepts were found to be unsatisfactorY for fully accounting for the complexity of spatial behavior. Coupled with the decline in such an approach, has been a resurgence of interest in cognitive types of concepts. In Ethology, investigators have begun to use more sophisticated methods for the study of homing and navigational behaviors. In the general area of Neuroscience, marked advances have been achieved in the understanding of the neural mechanisms underlying spatial behaviors. And finally, there has been a burgeoning interest and body of knowledge concerning the development of spatial behavior in humans. All of these factors combined to suggest the necessity of bringing together scientists working in these areas with the intent that such a meeting might lead to a cross-fertilization of the various areas. Possibly by providing a context in which members of the various disciplines could interact, it was felt that we might increase the likelihood of identifying those similarities and differences in the concepts and methods common to all groups. Such an identification could provide the basis for a subsequent interdisciplinary research effort.