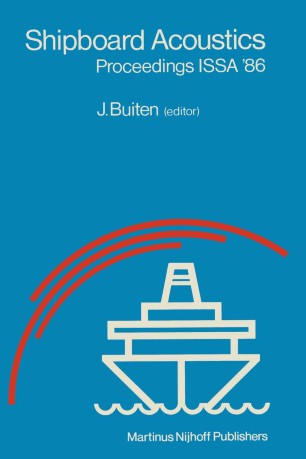 Proceedings of the 2nd International Symposium on Shipboard Acoustics ISSA ’86, The Hague, The Netherlands, October 7–9, 1986

The first International Symposium on Shipboard Acoustics, held in Noordwijkerhout (The Netherlands) in 1976, was a meeting of invited experts, each having considerable expertise in ship acoustics. Many of the participants were dealing with research on various ship acoustical subjects, and it proved to be a good idea to discuss future investigations and new techniques. At that time acousticians learned to use real-time signal-processing techniques and attempts were made to establish sound level prediction methods based on semi-fundamental considerations instead of the methods using empirically obtained data. Time was pressing as it was assumed that, in view of the adoption of Recommendation 141 of the International Labour Conference in 1970, authorities would soon make appropriate provisions to "protect seafarers from the ill effects of noise". This resulted in several national recommendations followed by the IMO "Code on noise levels aboard ships" which was adopted by the IMO Assembly in 1981. After that, pressure on the authorities was increased further by the decision of the European Community to protect labourers against harmful noise at their workplaces, including ships. Legally enforceable noise limits will therefore become normal in the future. In many countries recommendations with respect to maximum allowable sound pressure levels in the crew accomodations and work area aboard ships were already taken into account by ship owners, long before the existence of the Recommendations.