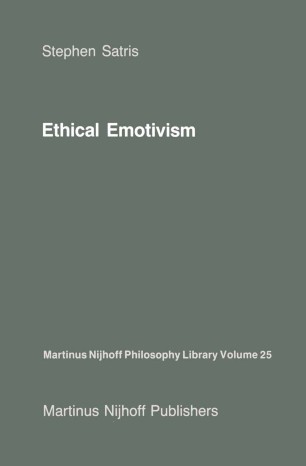 The primary contributions of this work are in three overlapping categories: (i) the history of ideas (and in particular the history of the idea of value) and moral philosophy in both continental and Anglo-American traditions, (ii) the identification and interpretation of ethical emotivism as one of the major twentieth-century ethical theories, and (iii) the evolution of a philosophically viable form of ethical emotivism as an alternative to utilitarianism and Kantianism. In addition, along the way, many particular points are touched upon, e. g. , the relation of Hume to Stevenson and emotivism, the facti value distinction, and human emotional and social nature. The work begins by challenging the received account of the development of twentieth-century moral philosophy, i. e. , the account that occurs in all the recognized historical books (such as G. c. Kerner, The Revolution in Ethical Theory, Oxford, 1966; G. 1. Warnock, Contemporary Moral Philosophy, London, 1967; W. D. Hudson, Modern Moral Philosophy, London, 1967; Mary Warnock, Ethics Since 1900, 3rd ed. , Oxford, 1978; and W. D. Hudson, A Century of Moral Philosophy, New York, 1980). This received account is not only the property of scholars of the history of recent moral philosophy but is also generally assumed by philosophers themselves, and is repeated quite uncritically in the literature at large.