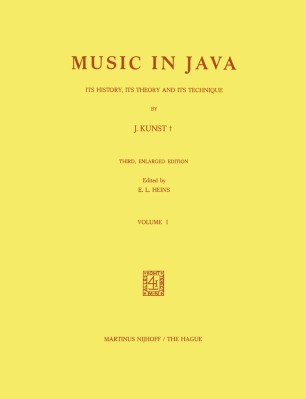 Its History, Its Theory and Its Technique

One day in the summer of 1921 a postal delivery brought me a little packet of reprints from the periodical "Djawa" : articles about Indonesian music by Dr. JAAP KUNST, which until that moment had not come to my notice. A cursory glance was enough to convince me that the author was a very gifted man, who had made a sound and absolutely scientific study of the subject, and thereby made a valuable contribution, by means of careful observation and actual tone-measurements, to the facts known from the older studies by GRONEMAN, LAND and ELLIS. These measure­ ments were particularly satisfying to me personally, since they constituted an astonishing confirmation of a hypothesis concerning the genesis of tone­ systems (through the "cycle of blown fifths"), which I had propounded two years previously, without, however, having published it. At the same time it was proved, through the perfect conformity existing between the measured and the theoretical absolute pitches (vibration frequencies), that Indonesian gamelan tuning, too, belongs to the radius of ancient Chinese culture - much the same as is the case with Pan-pipes and xylo­ phones all over· the world. The first contact between Dr. KUNST and myself led to a regular cor­ respondence, which especially contributed to a further development of the above-mentioned theory of tone-systems.