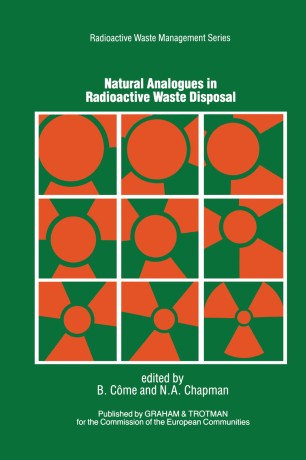 In order to validate predictive models of the very long-term processes which affect the performance of radioactive waste repositories, there has been an increased interest in the information and understanding which can be obtained from studying similar mechanisms in natural systems. These "natural analogues", as they are known in the jargon of waste management, have been studied sporadically for many years, but there has been a considerable rejuvenation of interest in the last four years, possibly owing to the fact that performance assessment methodolo­ gy is gradually maturing to the point where it needs the kind of support which analogues can offer. Since 1982, the Commission of the European Communities has been involved in specific work on natural analogues in the framework of its activities on radioactive waste management, principally within the MIRAGE project which concerns migration of radionuclides in the geosphere. As a consequence, the Commission took the initiative, in 1985, of establish­ ing a Natural Analogue Working Group (NAWG) whose members can benefit from the overall expertise available for managing their own natural analogue research programmes. In this group, modeller' s requirements and the results of field research are exchanged at regular intervals. A number of wide-ranging investigation programmes, both on national and international scales. are currently underway or being initiated, and several of these have been discussed recently at the NAWG.