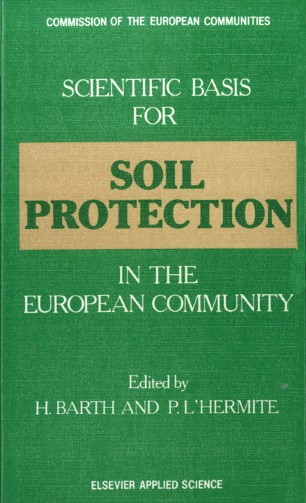 Scientific Basis for Soil Protection in the European Community

PH. BOURDEAU Directorate-General Science. Research and Development. Commission of the European Communities. Brussels. Belgium We are living on a unique planet, the only one in the solar system where life exists. The very existence of life has modified the physical and chemical environment of the earth, its atmosphere and oceans, in a way that makes life sustainable. This system with its complex cybernetic mechanisms has been named GAIA by Lovelock. Man has always interfered with it on a more or less limited scale. This interference is now reaching global proportions such as climate modifications resulting from CO and trace gas 2 accumulation in the atmosphere or the destruction of stratospheric ozone, not to speak of global radioactive contamination. GAIA will probably prevail as a living system but it probably does not give much importance to man's survival as such, and it is man that has to take care of his own survival. In the ecosystem of Planet Earth, soils are the thin interface between lithosphere and atmosphere which constitutes the essential substrate for the terrestrial biosphere, the productivity of which far exceeds that of the oceans, even though the latter cover a much larger area than the continents. Soils themselves are complex systems. They develop through weathering of minerals, are colonised by living organisms which in turn modify their substrate making it suitable for other organisms. This induces a primary ecological succession which eventually reaches a climax, in equilibrium between climate, soil and the biological communities.