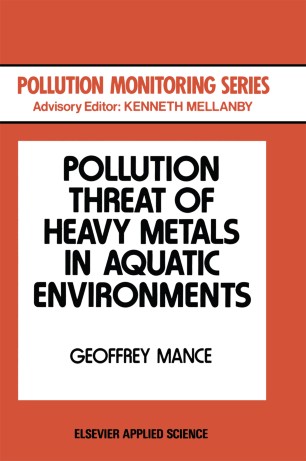 The role of the European Community in developing environmental legislation has focused the minds of pollution control agencies and industrialists on the need for, and the evidence to support, water quality standards. This is particularly so for the Dangerous Substances Directive which has led to European standards for cadmium, mercury and lindane. Additionally the United Kingdom has published standards for six other non-ferrous metals. In this book I have sought to review the aquatic toxicity information for these and other metals, not just by the collation of the results of all the published toxicity tests, but by the critical consideration of the test techniques. A surprising proportion of the reported toxicity studies for aquatic organisms are based on unsatisfactory chemical or biological methods. That such weaknesses persist at a time of limited resources for environmental research is disappointing, especially when sound metho­ dologies are extensively documented and widely published. Evaluation of the critically reviewed and vetted data indicates that many of the previously accepted generalisations about the toxicity of metals to aquatic life are invalid: for instance the assumption that salmonid species of fish are more susceptible to these metals than coarse fish, or that increased water hardness decreases toxicity. Too few studies have actually sought to test such hypotheses.