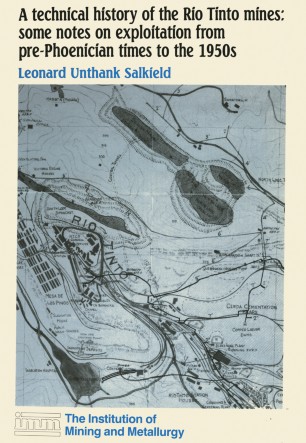 A technical history of the Rio Tinto mines: some notes on exploitation from pre-Phoenician times to the 1950s

Whether the Phoenicians and t he In the south-west of the Iberian Carthaginians ever actually worked Peninsula there is a vast pyritic the mines , or were merely traders, is mineral ised zone, known as the not certain , but after 205 BC, when Andevallo, extending from near they defeated the Carthagi nians, the Seville to south of Lisbon, an area Romans brought their own men skilled some 150 kilometres long and 30 in mining and metallurgy. kilometres wide. The Romans occupied most of the The Rio Tinta Mines , which are the Iberian Peninsula for 600 years , largest of this "pyrites belt" , lie until about 425 AD - the most recent in the region known as Andalusia, Roman coins found at Rio Tinto show some 90 kilometres north-west of the head of Honorius who was emperor Seville and 75 kilometres north-east from 395 to 423 AD. Mining must of Huelv8 . They have a very long have declined with the invasion of history, dating back to pre-Iberian Barbarians in the 5th century and the times; then came the Iberians , a race subsequent entr y of the Visigoths who of North African origin (Turdetarian were eventually absorbed into the and Tartessian) , the Phoenicians , the people of Spain. In 711 AD the Carthaginians , the Romans , the Moors, Moors invaded the Peninsula from the Spaniards and the British. It North Africa.