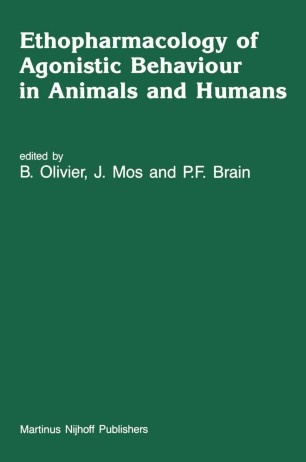 Ethopharmacology of Agonistic Behaviour in Animals and Humans

Part of the Topics in the Neurosciences book series (TNSC, volume 7)

. Aggression research is in a rapid state of development. The accelerating knowledge of neurotransmitter systems in the brain, their behavioural functions and the development of drugs which may specifically affect systems related to attack and defence is fruitfully combined with studies in which basic ethological observation and quantification techniques are used more routinely. Moreover, much of the experimental effort has finally applied some order to the initial chaos which afflicted the various experimental aggression models used in pharmacological, physiological and ethological research. This highly desirable trend not only leads to a better understanding of the phenomena studied and the terminologies employed, but it increases our awareness of the multiplicity of factors that are important, making it difficult to allow over hasty and simple generalizations. This book is a compilation of studies presented at the International Society for Research on Aggression meeting in Chicago 1986, in which leading investigators were invited to cover aspects of ethopharmacological aggression research in a wide variety of species, including studies on humans. The level to which ethological techniques have been incorporated into the various areas of research differs, as well as the knowledge and understanding of the neurotransmitter and experimental drug action on brain functioning in mammalian species. This naturally results in data which are not always easy to compare or to extrapolate between species but useful indicators are starting to emerge.