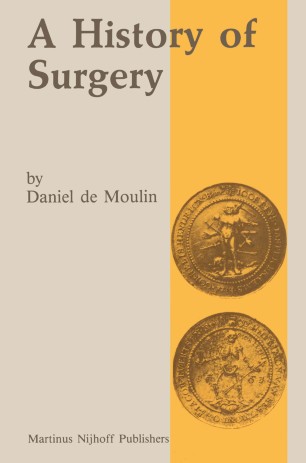 A history of surgery

with emphasis on the Netherlands

Surgery as a medical discipline has from its beginnings appealed to the imagination of many. It is therefore not surprising to find that its colourful past has induced quite a few authors to take up their pens. The truth of this in the Netherlands is witnessed by a number of dissertations and monographs and especially by the numerous articles related to the history of surgery which have appeared in the medical weekly Nederlands Tijdschrift voor Geneeskunde, particularly during the two decades preceding the Second World War. The memorial volume, published in 1977 by the 'Nederlandse Vereniging voor Heelkunde' (Association of Surgeons of the Netherlands) has thoroughly covered the history of Dutch surgery since the tum of the century, but a chronological survey of the earlier events which led to these modem achievements is still wanting. This book has been written with a view to meeting this need. In it, Dutch surgery has by no means been taken as an isolated phenomenon, but considered in its context with European surgery as a whole. Foreign influences on the on surgery abroad are discussed Netherlands and, conversely, Dutch influences whilst contemporary medical thinking is set against a cultural and political back­ ground. It is hoped that this approach will allow the book to exceed the narrow boundaries of'campanilismo' and make it of interest to non-Dutch readers as well.