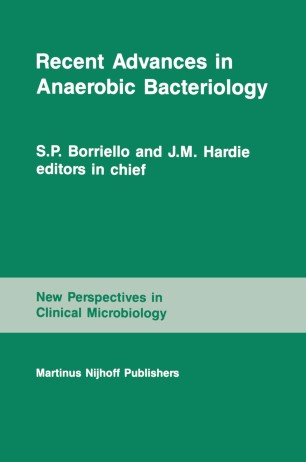 The Anaerobe Discussion Group (ADG) organised has four I-ntern-ational College, Symposia, all at Churchill Cambridge. The first was held in July 1979, the second in July 1981, the third in July 1983, and this, the fourth, on July 26-28th, 1985. The proceedings of each of these meetings have been published (see below). As on previous occasions, the scientific programme was designed appeal to the wide range to of interests represented by ADG members. The meeting was attended by delegates from allover the world,including medical mic- biologists, veterinarians, dentists, biochemists, gene- cists and scientists from several other disciplines, all of whom share a common interest in anaerobic mic- organisms. The interchange of scientific information and ideas between the delegates in such pleasant surroundings was, as always, a valuable and rewarding experience. Unlike previous Biennial Symposia in the series, this meeting was sponsored by a number of companies rather than by a single sponsor. Despite some intitial concern by the organising committee, this arrangement worked well and we are extremely grateful to all the companies who supported the meeting so generously. The names of the sponsors are listed individually in the acknowledgements section. We were also very pleased to welcome those companies who took part in the Trade Show during the meeting. This book contains the papers given by invited contributors, followed by abstracts poster of the demonstration presented at the meeting.