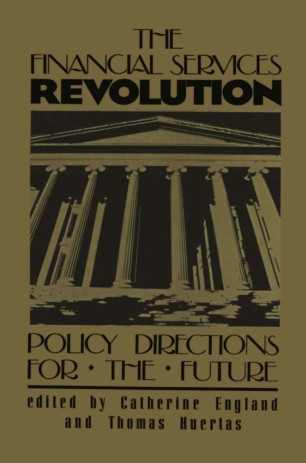 Part of the Innovations in Financial Markets and Institutions book series (IFMI, volume 1)

In Chapter 5, William Shughart also considers the part that politics played in banking legislation during the 1930s, but he looks at the banking legislation passed in the United States. Shughart draws par­ ticular attention to the provisions in the Banking Act of 1933 that required the separation of commercial and investment banking activ­ ities. Applying a public choice analysis, Shughart asks who gained from the provisions, and he concludes that the commercial banking industry, the investment banking industry, and the U. S. Treasury Department can all be said to have benefited in the years immedi­ ately following the passage of the act. Richard Timberlake, in his comment, extends Shughart's analysis to show how the federal gov­ ernment manipulated the monetary policy of the 1930s for its own benefit. The history of the regulation of the savings and loan industry is the subject of Chapter 6. James Barth and Martin Regalia examine the way in which regulation of the industry has evolved since the first savings and loan was established in the 1830s. They conclude that the stated purpose of regulation appears to have changed, even while the regulations themselves often have not. Barth and Regalia provide some important insights into the contribution of thrift regu­ lation to the current problems facing the indusb-y as well as some suggestions about the direction reform should-and should not­ take.