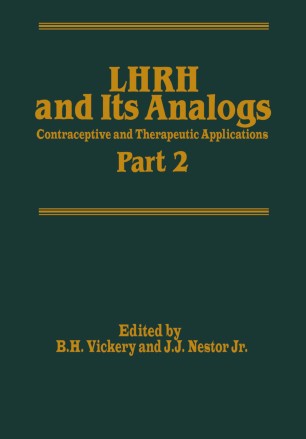 LHRH and Its Analogs

Since the discovery of LHRH in 1971, research into the physiology and therapeutics of this compound can be divided into three dis­ tinctly different phases. In the first phase, attention was paid chiefly to the natural sequence hormone; efforts were channeled to explore its diagnostic use; and nearly all the clinical investigations were coordinated by a single pharmaceutical company. The successes in this area were quite limited and the interest in the promise of this agent as a diagnostic test has long since waned. This phase of research con­ sumed roughly the first seven years of clinical testing after the isolation and characterization of the compound by the two groups involved in the Nobel effort. With the appearance of long-acting LHRH agonists, the second phase of research on LHRH began in the late '70's. LHRH agonists were the only compounds available during this period of research and paradoxical desensitization was the predominant therapeutic basis for the discoveries. An ever-widening number of therapeutic applications using this approach were unearthed. A second theme which emerged during this second 5-7 year period was that the pulsatile administration of the natural sequence LHRH could be used to treat LHRH deficiency in men and women.