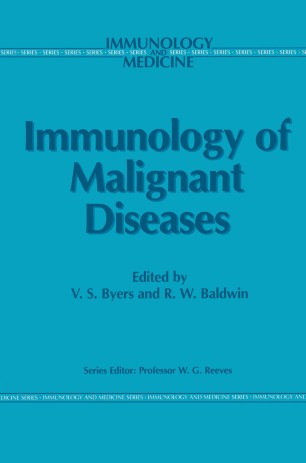 Part of the Immunology and Medicine book series (IMME, volume 6)

Over the past 5 years, clinical immunology, as a whole, has advanced more rapidly than over the past 20 years. Many of these advances have been que to monoclonal antibody technology with its ability to identify antigens on tumour cells with a precision never before available. Monoclonal antibodies have the ability to identify subsets of human T-Iymphocytes and aid in diagnosis of both immunodeficiency disorders such as AIDS, or autoimmune diseases, and they can be adapted as drug targeting agents. Additionally, however, major advances have been made in identifying immunomodulating agents, and the last year has seen two such agents, IL-2 and OKT3, made available commercially for such intervention. Furthermore, another immuno­ modulating technique, bone marrow transplantation, ha~ now been established as a curative modality in leukaemia treatment. A central issue in tumour immunology is whether human tumours express antigens which can be termed tumour-specific. This has important implications for both tumour immunity as well as drug targeting. This issue is considered in detail by R. A. Robins in the introductory chapter in which the expression of antigens in human tumours is compared with that in experimentally induced animal tumours. This controversial issue is also considered in later chapters by Bast in breast carcinoma, Riimke and de Vries in melanoma, V{mky in lung cancer, Armitage in colorectal cancer, and Paulie and Perlmann in bladder carcinoma.