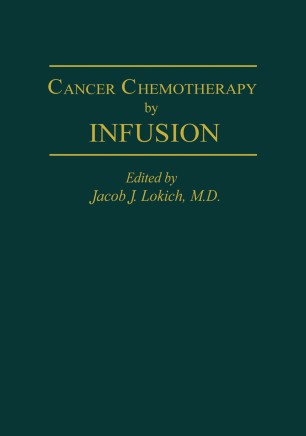 Chemotherapy for-cancer is in a state of evolution. Because some cancers can now be cured with chemotherapy as a singular modality, this therapy can no longer be viewed as simply a palliative contribution. Chemotherapy has assumed an important role as an adjuvant to other modalities, including both surgery and radiation therapy. For some tumors, the primary application of chemotherapy in a combined modality approach to curative therapy has resulted in the application of less radical surgery while achieving substantial of relatively rare tumors such as cure rates. Nonetheless, with the exception childhood tumors, hematologic malignancies, and testicular cancer, the effec­ tiveness of chemotherapy in most tumors is severely limited. At the cellular level, greater understanding of the specific mechanism of tumor cell killing and of the phenomenon of drug resistance are elusive, critical ingredients in the improvement of effectiveness in cancer chemotherapy. Prolonging the exposure time of the tumor cell to drugs is a concept that was addressed in the early phases of the development of chemotherapy. How­ ever, technological limitations inhibited the broader application of chemother­ apy by infusion until recent years. Also, the convenience of intermittent ther­ apy on an outpatient basis, with the predominant theory of drug effect based on a dose response as well as the proven effectiveness of this schedule in some tumors, has slowed the process of subjecting infusion chemotherapy to the rigors of clinical trials.