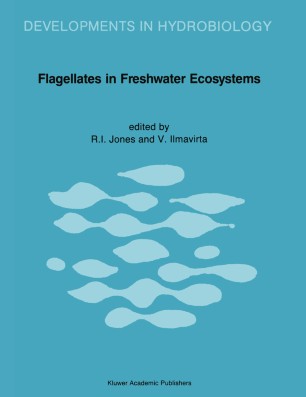 Part of the Developments in Hydrobiology book series (DIHY, volume 45)

It is not so very long ago that botanical concensus abandoned the distinction that was drawn between Algae and Flagellata, the latter having been regarded by zoologists as a group of the Protozoa. Even today some colourless flagellates may find themselves occupying different locations in contrasting taxonomic schemes. However, modern developments in ecology have placed greater emphasis on functional attributes of organisms, and hydro biologists have certainly been in the forefront of such changes. Thus we find that flagellates are again the subject of controversy, not so much over their taxonomic position as over their functional position - their role in aquatic ecosystems. At the 22nd Congress of the International Association of Theoretical and Applied Limnology in Lyon, France in August 1983, we conceived the idea of a meeting to discuss 'Flagellates in Freshwater Ecosystems'. This idea was approved by the committee of SIL and we arranged for the meeting to take place during June 1986 at Lammi Biological Station (University of Helsinki) in Finland. Participants from nine countries enjoyed outstanding hospitality from the staff at the Station during a week of lectures, excursions and discussion ses­ sions. On behalf of the participants we express our thanks for the generous sponsorship received from the Maj and Tor Nessling Foundation, the Academy of Finland, the Finnish Ministry of Education, Lammi Biological Station and the Finnish Limnological Society.