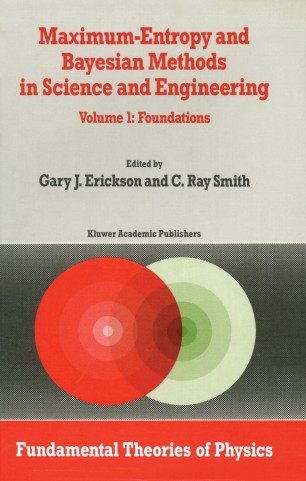 Maximum-Entropy and Bayesian Methods in Science and Engineering

This volume has its origin in the Fifth, Sixth and Seventh Workshops on and Bayesian Methods in Applied Statistics", held at "Maximum-Entropy the University of Wyoming, August 5-8, 1985, and at Seattle University, August 5-8, 1986, and August 4-7, 1987. It was anticipated that the proceedings of these workshops would be combined, so most of the papers were not collected until after the seventh workshop. Because all of the papers in this volume are on foundations, it is believed that the con­ tents of this volume will be of lasting interest to the Bayesian community. The workshop was organized to bring together researchers from different fields to critically examine maximum-entropy and Bayesian methods in science and engineering as well as other disciplines. Some of the papers were chosen specifically to kindle interest in new areas that may offer new tools or insight to the reader or to stimulate work on pressing problems that appear to be ideally suited to the maximum-entropy or Bayesian method. A few papers presented at the workshops are not included in these proceedings, but a number of additional papers not presented at the workshop are included. In particular, we are delighted to make available Professor E. T. Jaynes' unpublished Stanford University Microwave Laboratory Report No. 421 "How Does the Brain Do Plausible Reasoning?" (dated August 1957). This is a beautiful, detailed tutorial on the Cox-Polya-Jaynes approach to Bayesian probability theory and the maximum-entropy principle.