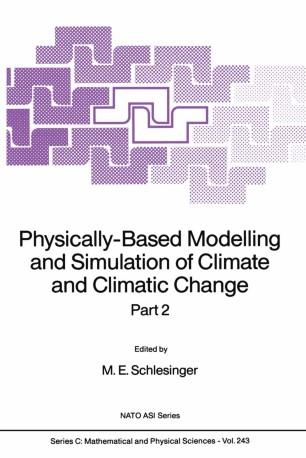 Physically-Based Modelling and Simulation of Climate and Climatic Change

The Geo-Sciences Panel is a synonym for the Special Programme on Global Transport Mechanisms in the Geo-Sciences. This Programme is one of the special programs established by the NATO Science Committee to promote the study of a specific topic using the usual NATO structures, namely, Advanced Research Workshops, Advanced Study Institutes, Conferences, Collaborative Research Grants, Research-Studies and Lecture Visits. The aim of the Programme is to stimulate and facilitate international col­ laboration among scientists of the member countries in selected areas of global transport mechanisms in the Earth's atmosphere, hydrosphere, lithosphere and asthenosphere, and the interactions between these global transport processes. Created in 1982, the Geo-Sciences Panel followed the Air Sea­ Interactions Panel which was very successful in reviewing mechanisms at the air-sea-ice interface. Initially the Geo-Sciences Panel recognized the importance of magma chambers, ore deposits, geochemical cycles, seismic activity and hydrological studies. However, the Panel was rap­ idly convinced that the climate system is one of the most important sys­ tems in which to promote research on global transport mechanisms. Consequently, the Panel welcomed the organization of a course on Physically Based Modelling and Simulation of Climate and Climatic Change. This course was launched in Belgium in 1984 during both the Liege colloquium on Coupled Ocean-Atmosphere tlodels and the Louvain-Ia­ Neuve General Assembly of the European Geophysical Society. Rapidly scientists recognized that this course was timely and would be well­ received by the climate community, especially by junior researchers in this multi- and inter-disciplinary field.