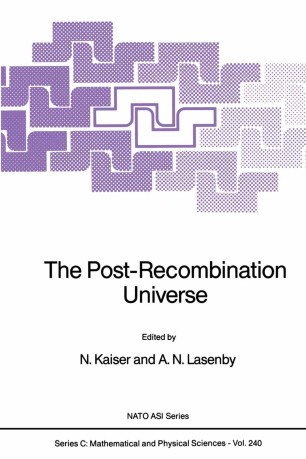 This volume consists of invited talks and contributed papers presented at the NATO Advanced Study Institute "The Post Recombination Universe" which was held in Cambridge in the summer of 1987. There have, in recent years, been numerous meetings devoted to problems in observational cosmology. The attention given reflects the exciting rate of de­ velopment of the subject, and a survey of the proceedings from these symposia reveals that a great deal of emphasis has been given to consideration of the very early universe on the one hand, and to large scale structure in the universe at the present epoch on the other. The theme of this meeting was chosen to comple­ ment these efforts by focussing on the state of the universe at quite early times, but at those epochs which are still accessible to direct observations. The meet­ ing provided a broad coverage of the post recombination universe by drawing on experts from a wide variety of fields covering theory, background radiation fields and discrete sources at high redshift. Events in the moderately early universe will have left their mark in a great range of wavebands, from X-rays to the microwave region, and the evolution of the universe can be revealed by studies of the inter­ galactic medium, gravitational lensing and the abundance and clustering of high redshift sources. All of these subjects received much attention at the meeting, and the papers demonstrate the rich interplay between these areas in the rapidly expanding world of observational cosmology.